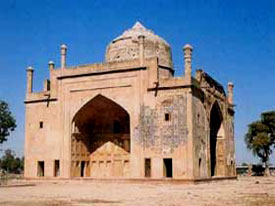 Chini-ka-Rauza:The monument was built in 1639 A.D. by Mulla Shukrullah Shirazi, in his life time, who was the Prime Minister of Shahjahan. He was also a famous poet of that time and composed several poetry under the pen name of 'Allami'. Uniqueness of this monument, lies in the fact that every portion of this building is enriched with profuse decoration in variegated schemes of colours due to which the monument is popularly known as 'Chini ka Rauza'.